We love beans, but ever since getting a Instant Pot we love them even more. There just isn’t any comparison between freshly cooked dried beans and the canned ones from the store. Don’t get me wrong, canned beans are better than no beans at all – but the flavor, texture and control of added salt makes it worth cooking them from scratch. Dried beans also cook nicely in a crockpot, but they do take a little longer. Dried beans and lentils are nutritional powerhouses! They are high in protein, minerals, vitamins and fiber. And yes, they’re high in carbs as well, but the good kind. Add to that that beans help absorb cholesterol according to some sources and you’ve got the perfect food in a tiny package.

Usually I cook an entire pound of beans in my pressure cooker. I sort the beans and make sure there aren’t any stones hiding amongst them. Then I thoroughly rinse them and put them into the pot with plenty of water. I don’t add salt or anything else. When the beans are tender, I try to let them cool in the cooking liquid. Then I divide them up for different uses. Perhaps we’ll have some hummus, or an Indian curry or maybe they’ll just get marinated and then added to different kinds of salads.

In  a bowl combine a small chopped red onion, a bunch of thinly sliced scallions, the juice of one lemon, a tiny splash of sherry vinegar and a couple of tablespoons of olive oil. Combine everything well and then add the still warm garbanzo beans. Warm beans will absorb the seasonings better! Taste and if needed add a little sea salt and freshly ground black pepper. Let the beans marinate for an hour or longer if you have the time. Tightly covered, they keep well in the refrigerator for several days.

For the dressing add a splash of olive oil and a little lemon juice. I also always add a pinch of sea salt. Anyways, gently combine the dressing with the salad ingredients. That’s it! That’s how I grew up eating salad and that’s how I still like to eat it. Really simple, and it gives you a chance to taste all those delicious fresh vegetables.

Divide the salad up between plates and top each serving with a generous scoop of marinated garbanzos. If you have a ripe avocado, cut some of it into small cubes and add them to each salad plate. If you like grind some black pepper over the salad and enjoy! 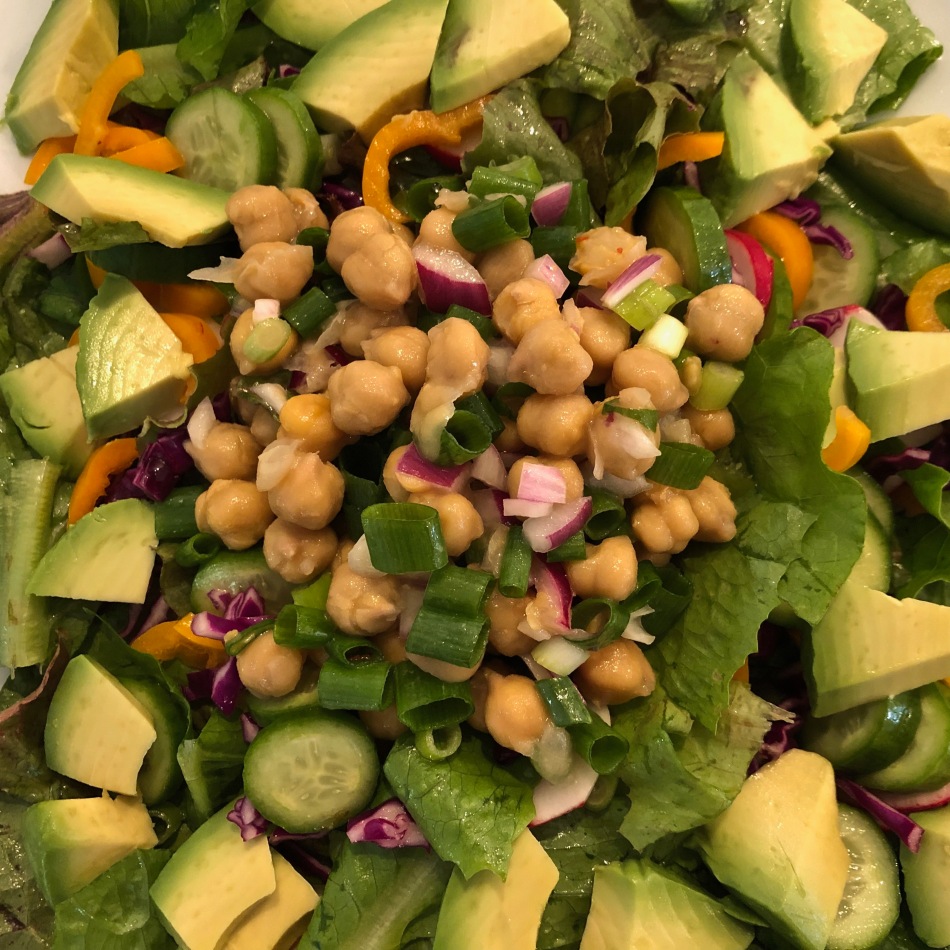 Another way to use up some of these freshly cooked garbanzo beans is by adding them to a German potato salad. It’s another simple salad I love to make and eat. Here in America, potato salad is almost always bathed in mayonnaise. I’ve never been a fan of mayonnaise, perhaps because we rarely had it when I was growing up. Occasionally my mom would buy some, but it came in small tubes like toothpaste. Here in the US many people buy it in gallon jars! This German potato salad is the same one we ate when I was little, except for the garbanzo beans. I add them to get a little more texture and nutrition.

First put some small, firm-cooking potatoes into a pot and cover them with cold water. Add a little salt and then gently boil them until they are tender. When the potatoes are done, drain them and let them cool a bit.

While the potatoes are cooking, ready the vegetables by finely chopping one small red onion and a heaping one half of a cup of pickles. Also add a couple of tablespoons of Dijon mustard and a third of a cup of pickle juice to the bowl. 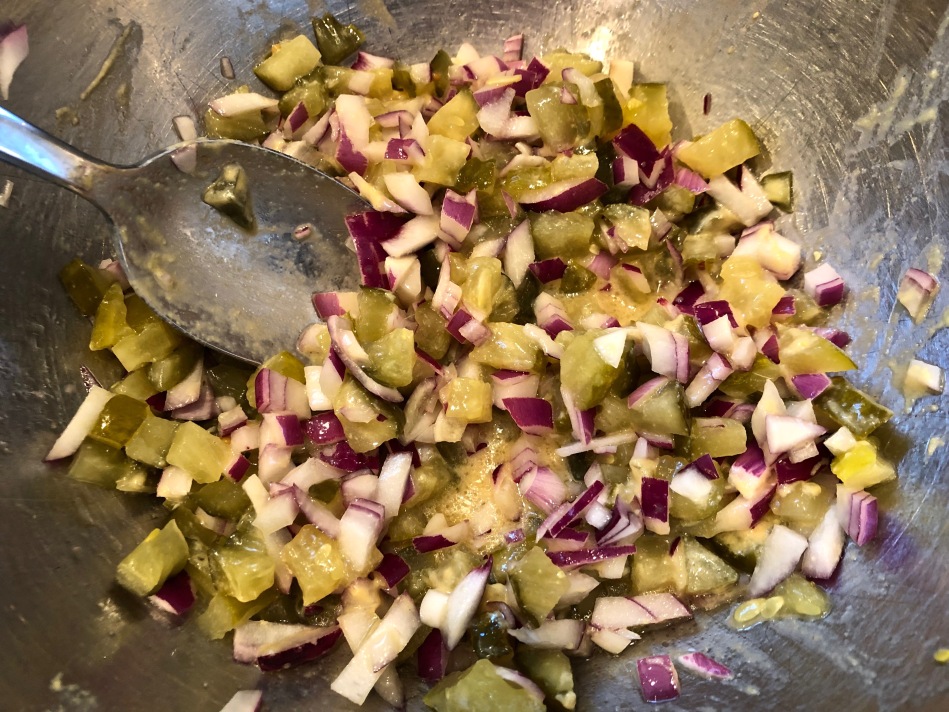 Combine  all the ingredients well.

When the potatoes are cool enough to handle, cut them into bitesize pieces and add them to the bowl. I prefer to leave the skin on, but feel free to peel the potatoes if you like them better that way!

Next add some of the garbanzo beans and also one cup of hot vegetable broth. Mix everything gently and thoroughly.

Lastly, slice a bunch of scallions into thin rounds and add them to the potato salad. Mix again and taste if it needs any salt and pepper. I usually find that the pickles, mustard and veggie broth add plenty of salt for our taste.

If you have the time, let the potato salad marinate for a bit. It’s really tasty served warm and also cold from the fridge.  We like to eat a tossed salad alongside this. This is perfect on a hot day!
🙂

8 thoughts on “Tasty Tuesday … A Pot of Beans two Ways”