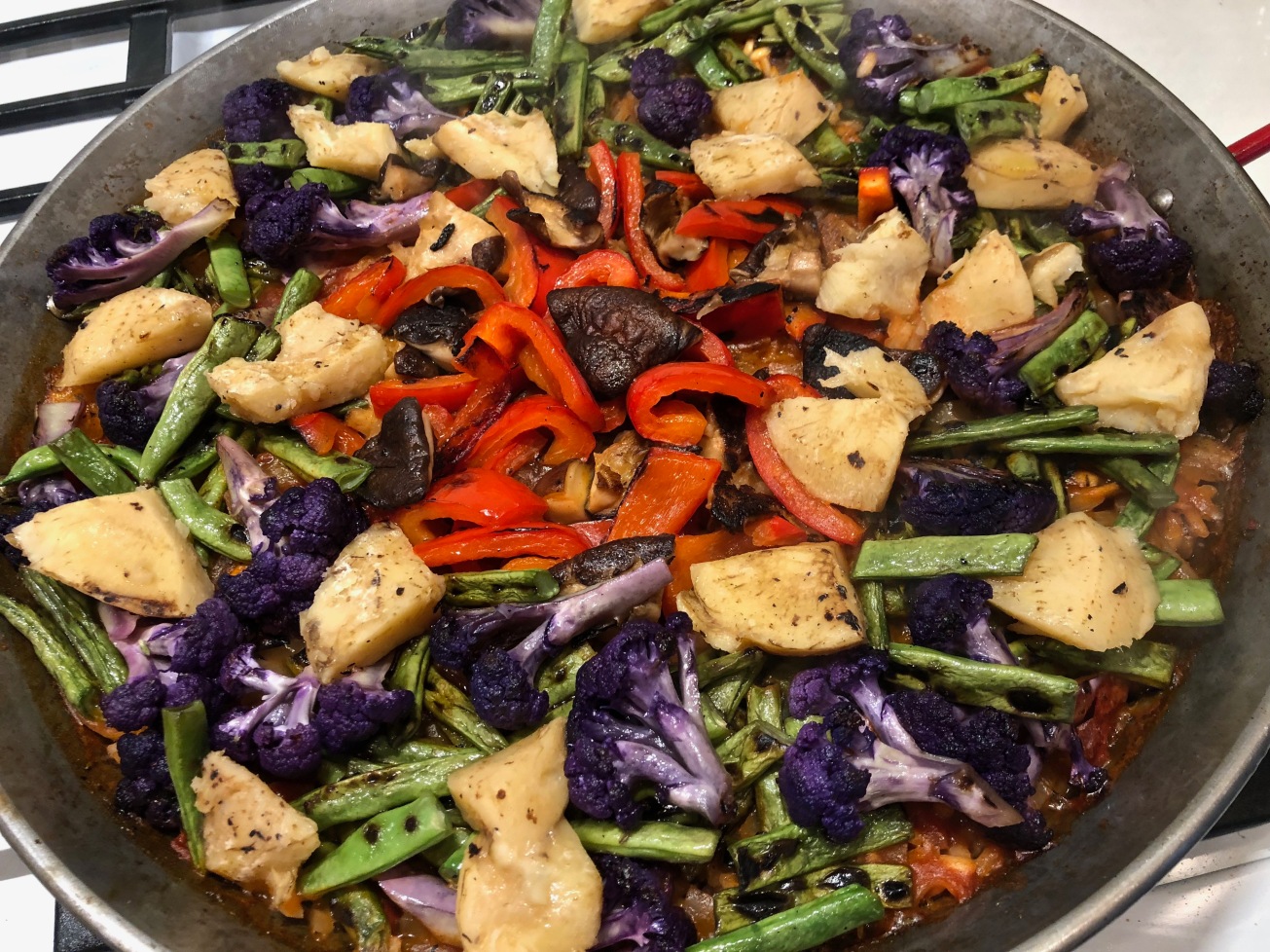 Paella always reminds me of Tarragona, the fascinating Spanish city we visited seven years ago. It’s right on the Mediterranean Sea, about an hour south of Barcelona. There, El Pigot quickly became our favorite place to eat! It was right on the town square which always bustled with activity during the evening hours. Restaurants and vermouth bars line the town square where locals hang out after work. Most of the outdoor tables would be occupied by people eating, drinking vermouth and talking until the early morning. And like clockwork we’d see the same four woman sitting together on a bench, talking, arguing and watching their young children run wild in the center of the square, every time we were there. But as lively as things were at the square at night, during the daytime it was quite and almost deserted. 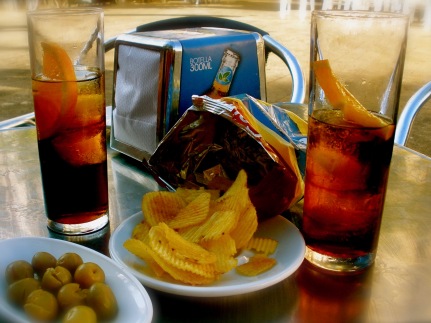 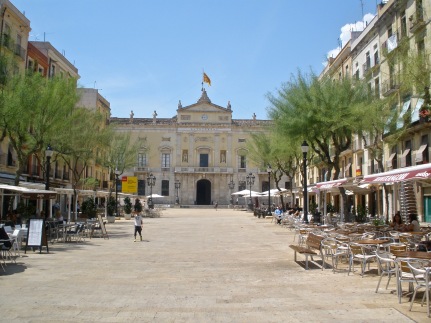 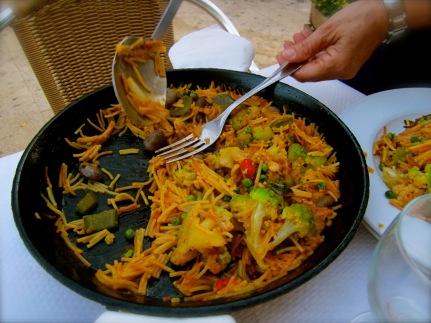 El Pigot served a mean paella! I hope to go back some day, sit outside at one of their outdoor tables, eat paella, drink some wine and watch the Tarragona world go by. And I can’t help but wonder if the four woman we saw sitting on that bench still meet up every night!?

So until another trip to Spain is on the menu, I’m making my own paella!

This recipe, which I adapted from Marie Simmons’ “Fast & Fresh Vegetarian”, is fairly flexible, except for the need of either a paella pan or a large (in diameter) shallow pan, and either Spanish paella rice or in a pinch risotto rice. Other important things to remember are to cook the onion-tomato mixture well and to not stir the rice once it’s mixed into the tomato base. Stirring will give the rice a gummy texture. Use whatever vegetables you like and are in season where you live to get the best results.

In a paella pan or regular skillet heat a little olive oil over medium high heat. 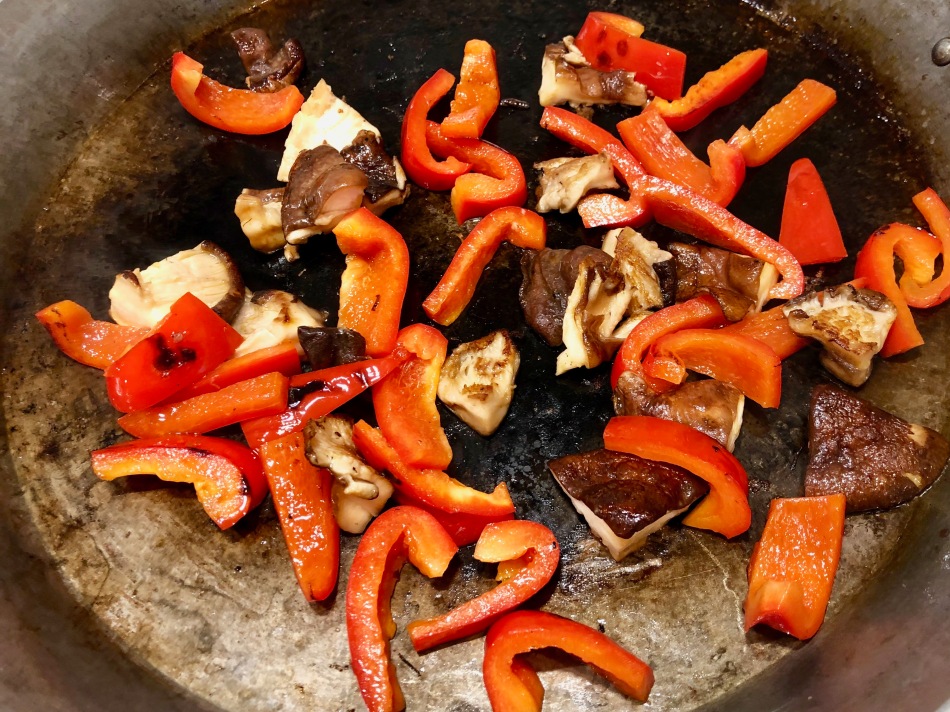 Add the sliced peppers and shiitake mushrooms.
Stir and cook until veggies get a little brown. Season with salt and pepper.
Remove to a plate and set aside. 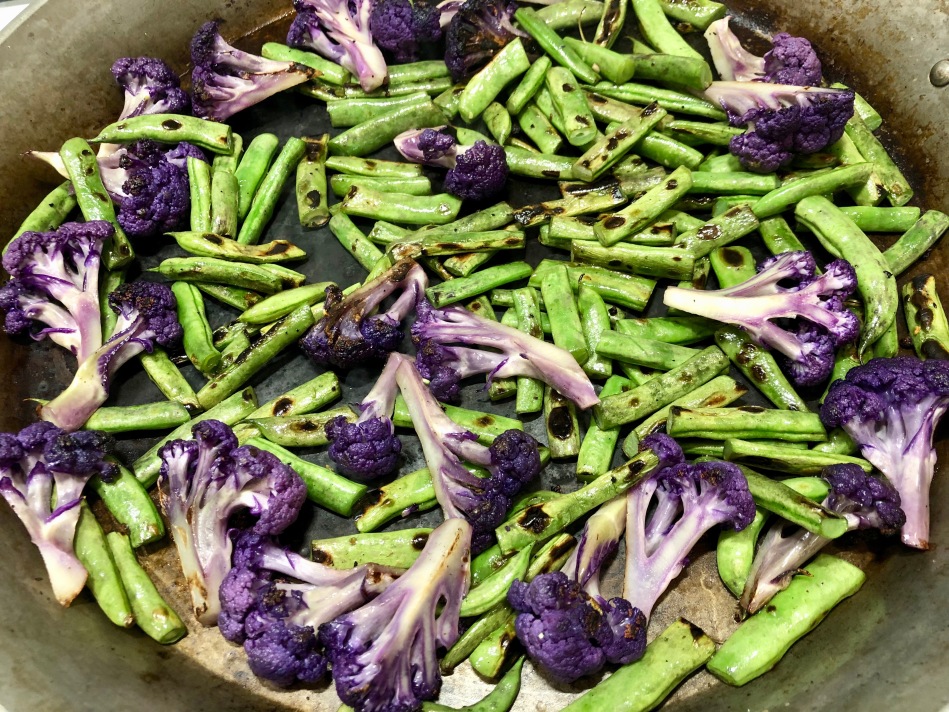 Add another splash of olive oil to the pan.
Sauté the cauliflower florets and green beans until slightly charred.
Season with a sprinkle of salt and pepper.

Add the beans and cauliflower to the veggie plate and reserve.

Heat another splash of olive oil in the pan.
Add the chopped onions and sauté until golden and soft.
Add the garlic and cook for another minute.

Add the entire can of tomatoes and stir.
Cook over high heat until all the tomato juice has evaporated. 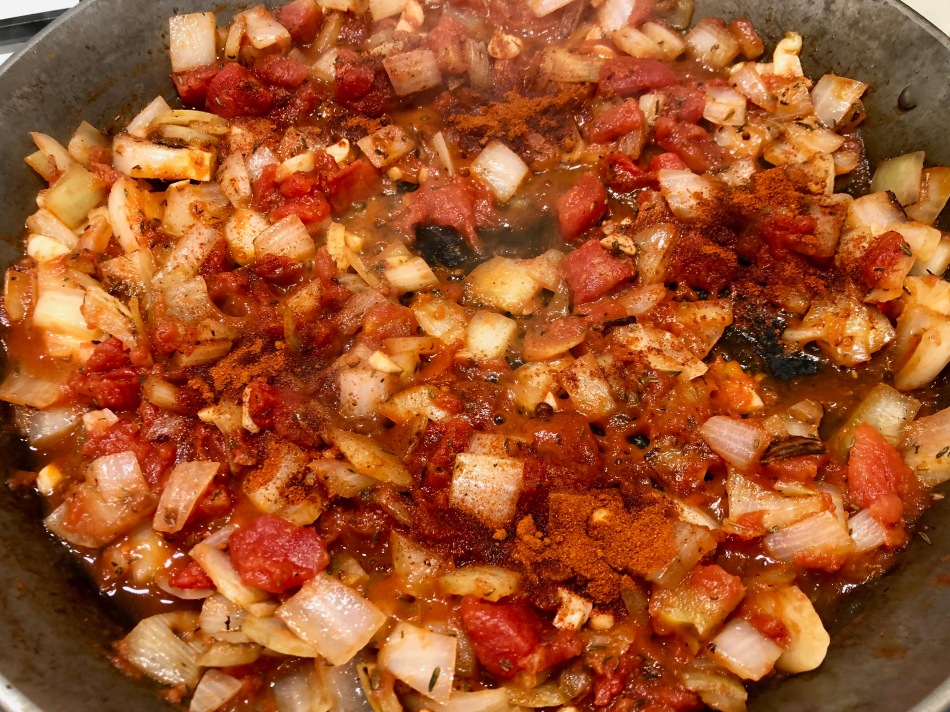 Turn down the flame, add the smoked paprika and thyme and stir. 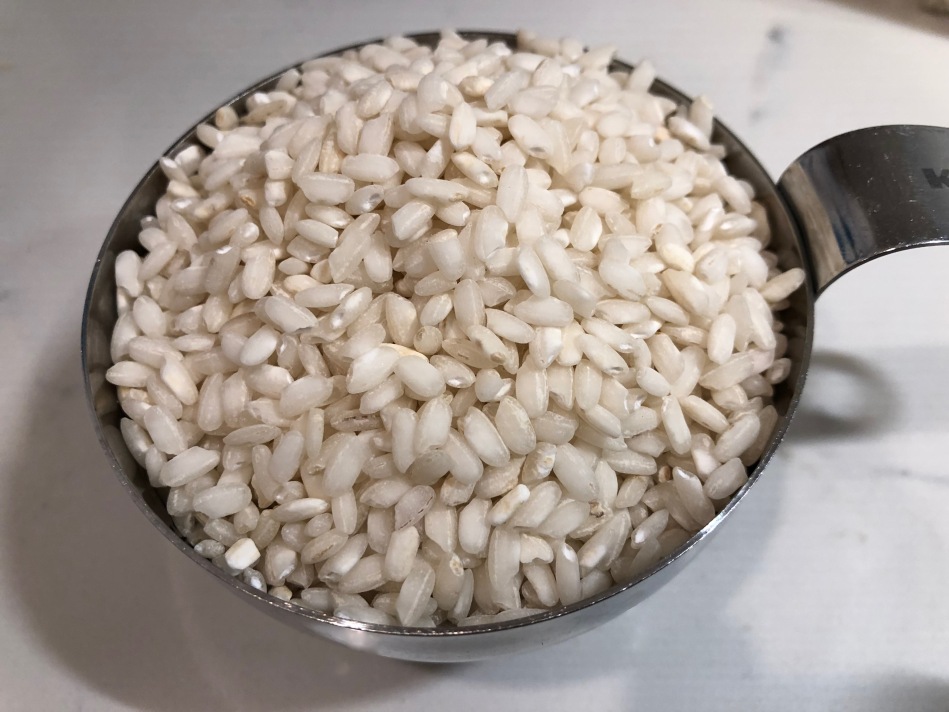 Add the rice to the tomato mixture and stir to coat every kernel.

Add 4 cups of the boiling water and 1 to 1 1/2 teaspoons of salt.
Bring to a boil, then turn down the heat to a simmer.
Cook the rice without stirring until most of the liquid has been absorbed.
This should take about 15 to 20 minutes.

Layer the reserved vegetables evenly across the paella.
Pour 1 more cup of boiling water across the vegetables.
Continue to simmer the rice without stirring until all the liquid has been absorbed.
Taste to see if the rice is tender.
If not, add a little bit more water and simmer a few more minutes.
Increase the heat, cook a few more minutes so the rice forms a crispy crust in the pan.
Let the paella rest for a few minutes after you turn off the heat.
Adjust seasoning and enjoy!
🙂 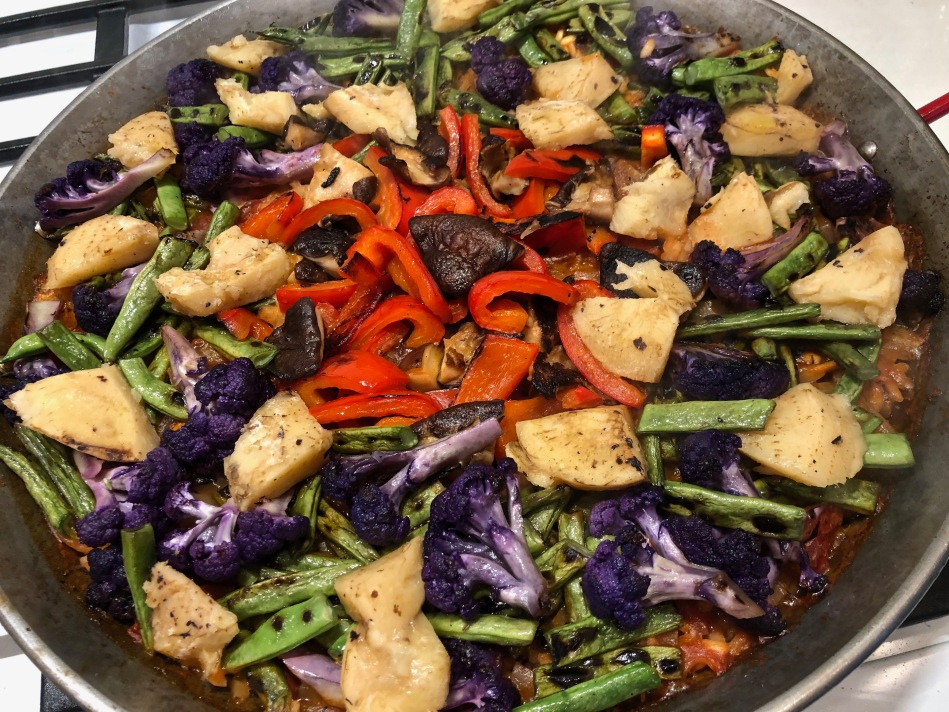 The crust at the bottom of the pan is my favorite part! 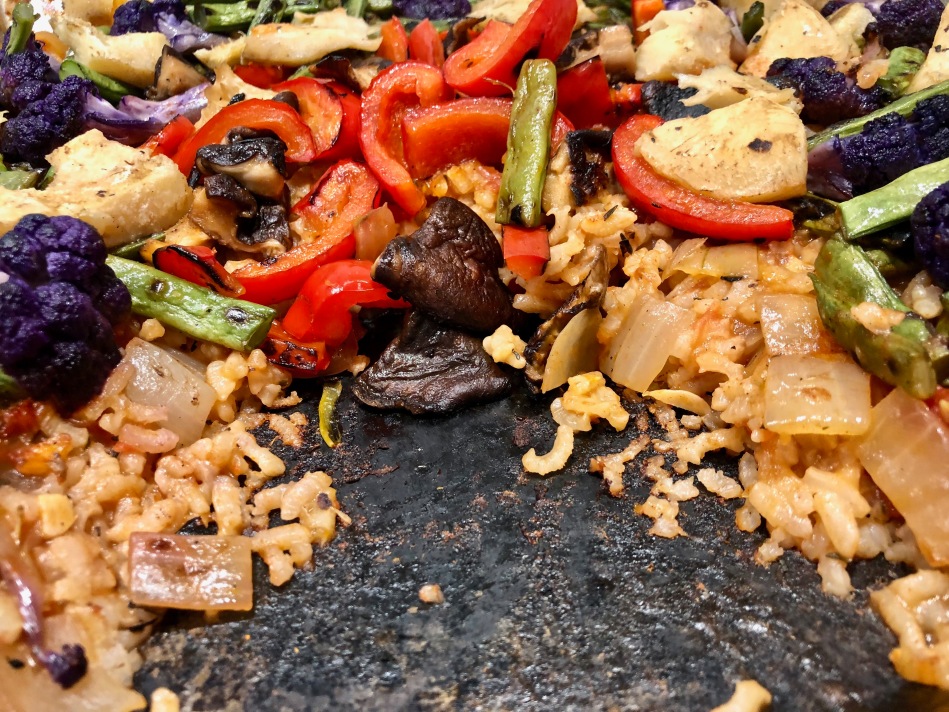